Single Mom Becomes a Radio Show Producer in Less Than a Year! 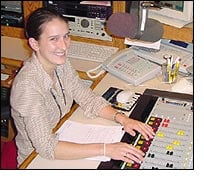 A single mother with a high-school education, Marissa Northy went from cleaning houses to being a Morning Radio Show Producer in less than a year via Radio Connection’s Broadcast Program. Here’s her story:

“During my lunch hour one day, I was surfing the Internet, trying to figure out what I wanted to do with my life,” Marissa recounts, “when I came upon Radio Connection’s Web site.
“The site listed all the things that Radio Connection offered, and it really appealed to me: a ‘foot in the door’ way to approach things, rather than spending US $60,000 and going to school for 4 years, then trying to pursue something.”

Marissa set the info aside for a while, but finally called the number.

“I got a call back from [Radio Connection pres.] Jimi [Petulla], who gave me the lowdown on all the details, and we decided what would be best for me,” recalls Marissa.

When I heard about Recording, Radio, Film Connection years ago, I thought it was a great idea. The first time I actually participated, I was kind of skeptical. But I found out that the people who are coming through this program are way more interested in being a help than the interns we used to have.

This is very much a win-win situation.

Marissa Northy is a great example. She’s a single mom, whose primary job was doing housecleaning. She could have been confined to
lower-income work for an entire lifetime. But she got an internship here, and she was one of those people that just caught onto everything right away. She came in and was doing gangbusters for us.

I don’t think she’s done moving up at EnterCom, because we’re just waiting for the next position to offer her.

That’s how advancement in Radio happens — you just move up the ladder. Management is looking around for the people that are good and available.

“Jimi set me up with an interview at Entercom Seattle (which houses 8 different stations), where I met with Program Director Blair Schultze and his assistant. They had me do a read, and within 2 days I had a response back: they wanted me to come and extern with them.”

Though she was still working her full-time job, Marissa had no problem going through the program. “They were very flexible,” she says. “I was there twice a week, but I pushed for more time, and soon got it. In fact, I took all the time that I could get!”

The managers at Entercom were quick to recognize Marissa’s work ethic and enthusiasm, and within 6 months had moved her into a part-time paying position: working on the Howard Stern show, which was syndicated through KISW.

A few months later, an Associate Producer spot opened up at “Robin and Maynard,” a popular morning show on KQBZ, “The Buzz.” But it didn’t stop there.

“Within a couple of weeks, the producer left,” Marissa explains. “Now I’m moving into his job! It’s a full-time position, with salary, benefits, the works.”

“That’s how it happens at a Radio Station,” points out Marissa’s Mentor, Blair Schultze. “When an opening comes up, the managers look around for someone who is good, and available. I don’t think this is the end of the line for Marissa — she’s got a future here at Entercom.”

“Radio Connection really did what they promised,” enthuses Marissa. “The program gives you a lot of practice material, but doing it in the studio is a lot different than doing it in a class.

“You’re getting hands-on work experience, rather than someone telling you how it’s going to be. It really gave me the upper edge over anyone looking for an internship — I was going through the program at the same time I was showing the people at the company what I could do,” she says.

“I’m really thrilled with the program. I could have done the same thing by paying US $60,000 to go to college, and wasting 4 years. Instead, in less than a year, I’ve been able to get where I wanted to be!”